ETH inflation has been 872x less than BTC

Ethereum switched from a proof-of-work to a proof-of-stake in September. Ethereum officially became a deflationary asset due to the transition to proof-of-stake, along with a fee-burning mechanism went into effect last year.

Ethereum Improvement Proposal (EIP) 1559 is an upgrade in the Ethereum blockchain that happened on August 5, 2021, focusing on how Ethereum calculates and processes network transaction fees (also known as "gas fees"). With each new transaction, Ethereum tokens began to burn from part of every transaction fee.

This impacts the slowing rate of new Ethereum issuance. This led to Ethereum officially becoming a deflationary asset.

Earlier under the original Ethereum gas fee system, users bid a random amount of money to pay for each transaction. A busy network leads the system causing high and unpredictable gas fees.

Now in today's system, gas fees will have two components – “Base fee” which will be a standard charge that all users will pay and “Tip” which will be an optional extra payment that users can pay to speed up their transactions and add it to the block.

This is resulting in the reduction of the total supply of Ether tokens, making Ether less in quantity and therefore more valuable. 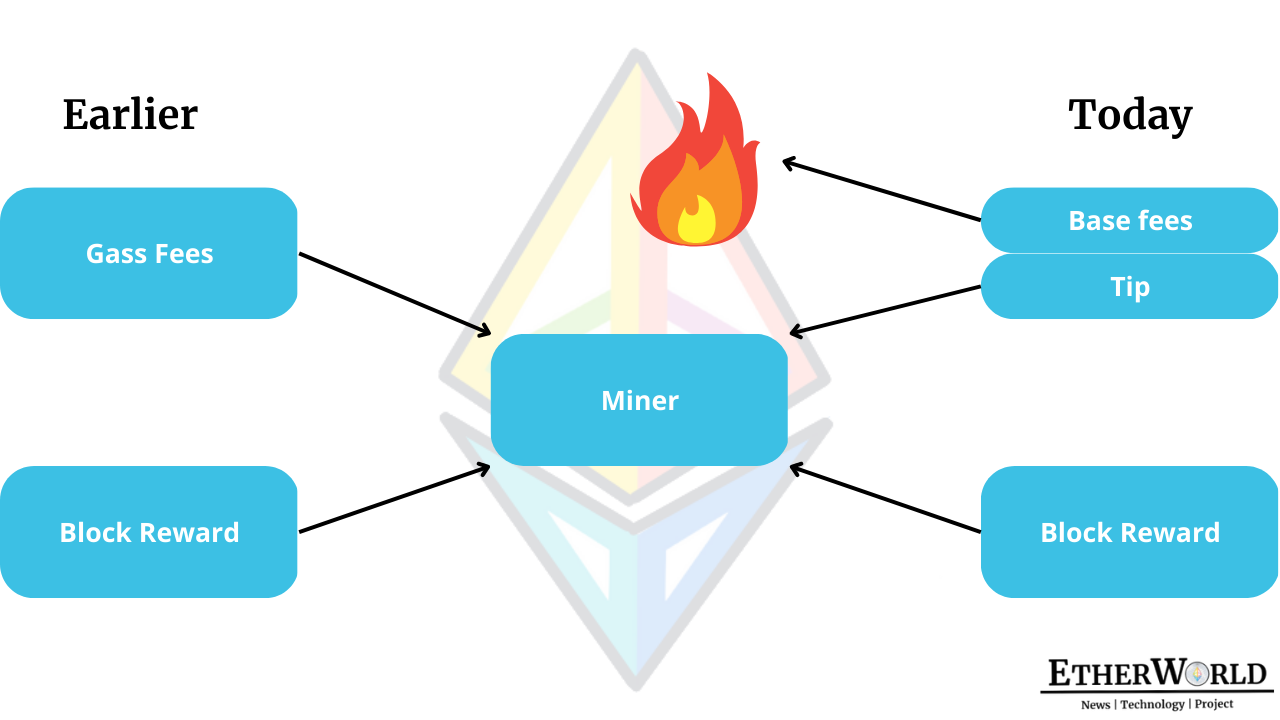 The above fig. shows how the new-fee mechanism will work in EIP-1559. Previously fees were paid to miners, who also received the block reward. Now after the merge, the base fee is burned, but the tip and the block reward go to the miner.

The mathematics behind the new-fee burning mechanism is complex, yet it has to do with the process through which fees are calculated for each new blockchain transaction under a proof-of-stake mechanism.

Ethereum is ultra-sound money as the absolute supply of Ethereum is now declining over time. Whereas, the supply of Bitcoin is still increasing over time until it will reach a fixed circulation of 21 million bitcoins. If the ultra-sound money concept takes off, it's possible that investors will increasingly invest in Ethereum and not Bitcoin as a way to protect their investments from inflation.

According to this site ultra-sound money 1.65 ETH burnt per min, 2,375.70 ETH is total burn and issuance of ETH is 1.40x in a day after ethereum switched to pos. This shows the exact data of issuance of ETH and burning rate in the form of numbers and graphs .

Lastly reaching the conclusion that the supply of Ethereum in circulation is now declining. The net impact is the slow rate of new Ethereum issuance. Therefore, ETH inflation has been 872x less than BTC.