About $4.34 Billion are locked in L2 scaling solutions. It is anticipated to see the majority of activity occuring on Layer 2 due to the growing support for DeFi tools, relatively less transaction costs, and scalability. As we are expecting more users to be onboarded to Web3, some dapps will need specific tailoring that a new & separate layer can serve better. In this article, we will get an overview of different blockchain layers and how Layer 3 will look in the future with the proposed framework by Starknet. 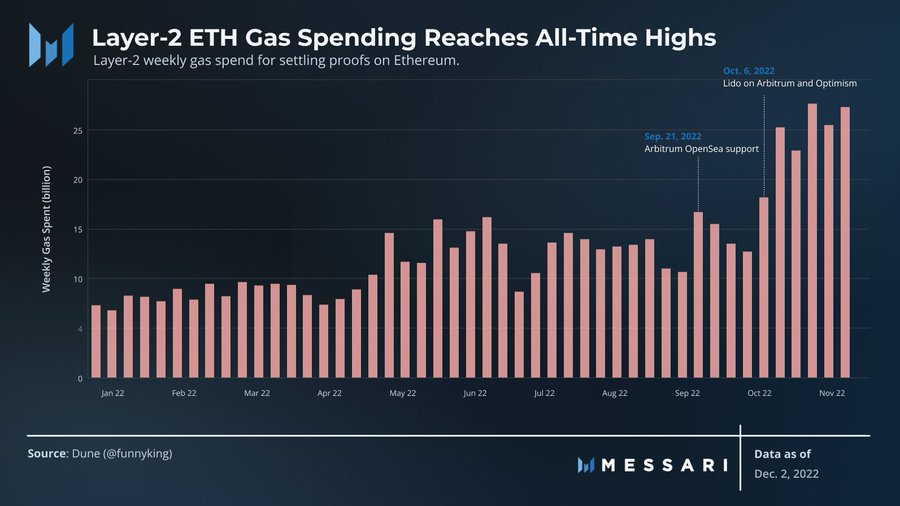 Layer 2 Solutions have boosted Ethereum's scalability. At the same time, they retain the benefits of decentralization, general-purpose logic, and composability. However, some DApps will need specific tailoring that can be served better by a new and separate layer.

According to Starknet Team, Multiple Layer 3 solutions will be on top of an Layer 2 with different use case. Moreover, additional layers, i.e., Layer 4 can be built upon Layer 3. 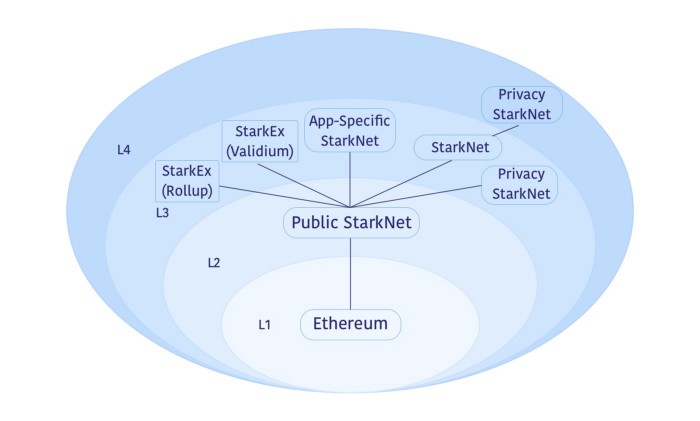 We can see similar customized scenarios for different DApps in the upcoming future.

In this section, we will see some advantages of the Layer 3 model.

Layer 2 can also be imagined as Ethereum scaling solutions. These are separate blockchains; each of which extends Ethereum and inherits the security guarantees of Ethereum. The main goal of Layer 2 solutions is to provide quicker settlement of transactions and scaling challenges being faced at the time. Arbitrum One, Optimism and zkSync are prime examples of Layer 2 Blockchains.

A Layer 2 blockchain communicates with Ethereum by submitting bundles of transactions to ensure that it has similar security and decentralization guarantees. All this requires no changes to Layer 1 (Ethereum). This lets Layer 1 handle security, data availability, and decentralization, while layer 2 handles scaling.

Layer 2 Blockchains take the transactional burden away from layer 1 and post finalized proofs back to layer 1. By removing this transaction load from layer 1, the base layer becomes less congested and more scalable.

Ethereum Mainnet (Layer 1) can only process roughly 15 transactions per second. When the demand to use Ethereum is high, the network becomes congested, and transaction fees increase. That is where Layer 2 comes in to scale Ethereum today.

Here is an article by the EW Team for a better understanding of various Layer 2 solutions like Rollups, Plasma, State channels, Sidechains, Parachains, etc., and much more.

Layer 1 Blockchains are also known as the base blockchains. Ethereum as Layer 1 includes:

Bitcoin, Ethereum and Cardano are prime examples of Layer 1 Blockchains.

Layer 0 blockchain lays the foundation for Layer 1 blockchains. It gives the underlying infrastructure to create chains and allows cross-chain interoperability, which means the chains created on top of Layer 0 can communicate with each other.

Layer 0 blockchains allow developers to create custom blockchains that can be tailored to their exact requirements. Parachains in the Polkadot are the perfect example of this concept.

Polkadot, Avalanche and Cosmos are prime examples of Layer 0 Blockchains.