An Overview of Beacon Chain API

What is Beacon Chain?

Here is a video by the EW Team which can help readers to understand the concept of the Execution Layer and Consensus Layer.

The execution client (also known as the Execution Engine, EL client, or formerly the Eth1 client) listens to new transactions broadcasted in the network, executes them in EVM, and holds the latest state and database of all current Ethereum data. The consensus client (also known as the Beacon Node, CL client, or formerly the Eth2 client) implements the PoS consensus, which enables the network to achieve agreement based on validated data from the execution client.

Here is video on The Merge Transition by EW Team which explains this concept in a simple mannner.

Ethereum is a distributed network of computers/nodes running software that can verify blocks and transaction data. The software application/client must be run on the user's computer to turn it into an Ethereum node.

A node is any instance of Ethereum client software that is connected to other computers also running Ethereum software, forming a network. On the other hand, a client is an implementation of Ethereum that verifies data against the protocol rules and keeps the network secure.

Here is an article by the EW Team on Ethereum Clients' Node Syncing Methods, where readers can get an overview of the syncing methods used by Ethereum Clients, its Syncing Strategies and Key Points on the Syncing Processes.

It is the collection of RESTful APIs provided by Ethereum Beacon nodes. This API specification is for the beacon node which enables users to query and participate in Ethereum 2.0 phase 0 beacon chain. The goal of this specification is to promote interoperability between various beacon node implementations.

The specification describes a RESTful set of endpoints that should be implemented by an Eth beacon node or a third-party service. This reduces the overhead of having to learn a new set of APIs when trying out a different client, and it allows network participants to reliably talk to each other over HTTP.

Sometimes readers are confused between Beacon Nodes and Validator Clients. So, here is a quick difference by EW Team. 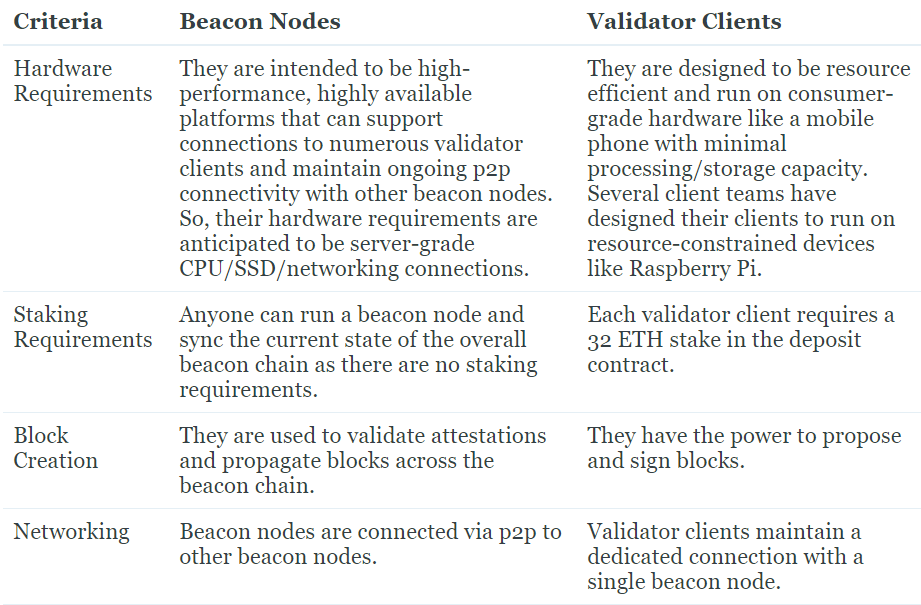 Here is video by the EW Team on the concept of Validator.

The Beacon Node API allows interactions between beacon nodes, including p2p networking connectivity as well as getting current beacon chain state and blocks from other nodes. On the other hand, the Validator Client API is designed for the interactions between a single validator client and the beacon node it is connected to for purposes of propagating block proposals and attestations to the network.

Users should not expose the beacon node API to the public internet or it will open users' nodes to denial-of-service (DoS) attacks. This API includes several endpoints which can be used to trigger heavy processing. Users can also use a firewall to limit access to certain remote IPs, allowing access only from one other machine on the local network.

The node/identity and node/peers endpoints expose information about the users' node's peer-to-peer identity. The --http-allow-origin flag changes the server's CORS policy, allowing cross-site requests from browsers. Users should only supply it if they understand the risks, like malicious websites accessing their beacon node if they use the same machine for staking and web browsing.