Blockchain and Freelancing: How Blockchain can Fuel the Gig Economy

Short Description: The gig economy was thought impossible just a little over a decade ago. Yet, against predictions of many economists, it is flourishing globally. 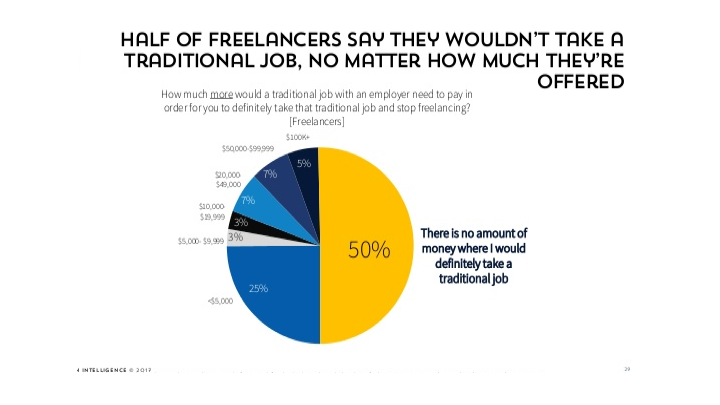 SlideShare Image showing the preference of freelancers for the Gig economy.

Mainly led by millennials, the gig economy allows people to make a living. Gig workers offer their services, usually on websites, and get hired and paid on a task-by-task basis.

It’s a much bigger market than some would think, too. The gig economy makes up about 34% of the workforce these days, as per an Intuit report. Moreover, analysts expect it to keep growing, perhaps even taking most of the workforce eventually.

But what are the downsides?

This growth has led to interesting debates. As more markets open to the gig economy, more workers both choose or are forced to join it. These days, saturation is so that it can be very difficult for some workers to find any gigs. In some areas, the gig economy has become a race to the bottom led by sites like Freelancer or Upwork.

Another commonly contested point is that freelancers often have no assurance that their clients will pay. While most experiences are good, all freelancers have problematic clients, and over half have gone unpaid at some point. Some websites, like clients from hell, even chronicle such experiences in a humorous manner.

With the rising popularity of blockchain, however, there’s space for improving the system. Blockchain, after all, has several features that seem perfectly suited for the gig economy and freelancing in general. Some analysts believe blockchain might help solve some of the problems of the gig economy, making it fairer for both sides.

Just as well, many clients feel unprotected when dealing with freelancers. While freelancing websites do tend to rule in favor of clients, outside said sites clients often find themselves without protection. Clients, just like providers, often have horror stories and some would rather not deal with the gig economy at all.

Even if you put aside arbitration issues, the gig economy is expensive for everyone in it. The main service hubs can take a cut of up to 20% of a contract’s budget. This cost, while often shouldered by the freelancer, is sometimes paid by the client, or by both. These rates also aren’t static and have risen over the last decade as the gig economy developed.

How do we solve the de-optimizers?

Blockchain and cryptocurrencies are often seen as possible solutions to these problems. The ledger system, with its rigidity and permanency, seems to offer the perfect venue where contracts can be stored. Once stored, while changes are possible, they will be reflected in the ledger and the original contract will always be visible.
The issue of workers going unpaid, or customers failing to receive their deliverables, can also be handled by blockchain. If all data goes through the chain, including the final deliveries, check systems to automate payments could exist. Just as well, since records of every delivery would exist, arbitration would be possible.

It’s not a new concept but having every step of the contract on the blockchain could help automate the system. Most freelance work websites do keep a history of messages between client and freelancer, but those are private. More importantly, on most websites’ freelancers have reasons to try and contact their clients outside the website. Specifically because work done outside the platform isn’t subject to use fees. 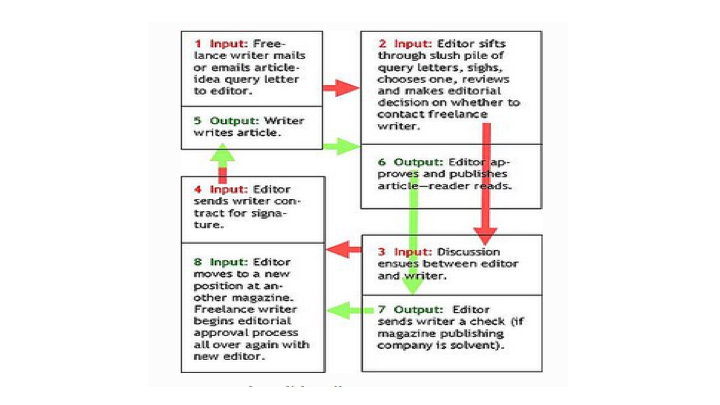 Most of the work done by freelancers is work-for-hire. Under this modality, all rights on the work belong to the client, with the worker receiving a one-time payment. While most work is fairly done like this, in certain occasions an equity payment could be considered fairer. However, no standard platforms out there allow for this, partly because of how difficult it would be to handle. But it won’t be difficult at all if we use smart contracts.

Smart contracts are one of the most interesting features the blockchain provides. They allow two or more parties to enter an agreement regarding earnings from a venture. Said contract is drawn on the blockchain, and all money from said venture is expected to go through it. The “smart” comes from the contract automatically calculating how much each party earns. It automatically divides any earnings as set by the contract, without needing a middleman.

This also comes in handy when a customer, or a freelancer, might not want a work-for-hire contract. Smart contracts allow for these details to be handled, sometimes automatically. While all the top freelancing sites today offer only work-for-hire, blockchain technology might change that.

A Better Way to Build Trust

Knowing whether a freelancer is presenting a false resume can be problematic. After all, all a client has is their word and, if they have worked on the site previously, their ratings. If they’re new to the site, then you’ll have to take the risk.
This might sound silly, but it’s an actual problem in freelancing sites. Many of the cheaper options customers find come from workers without any experience whatsoever. In most cases, scammers offer everything for a very low fee, only to then renege and do the bare minimum.

Most such cases end in arbitration, but sometimes a customer will agree to pay just to avoid the hassle. Truth is, freelancing sites are full of workers offering services they know little or nothing about. Finding just the right person can be difficult and giving a new worker a chance is a risk.

With a blockchain-based system, some of this could change. Blockchain is known for being, until now, impossible to hack. While putting personal information on a website is a bad idea, Blockchain could be used to certify a freelancer’s claims. If somebody claims to have a degree, a Blockchain freelancing system could ask for proof of it. This could work for any credentials, and the certification, once added, would be permanent.

While there are already a couple Blockchain-based freelancing sites, they’re still far from breaking into the mainstream. However, as adoption of Cryptocurrencies grows and other Blockchain-based projects take flight, these sites should gain public trust. Once that happens, the existing leaders of the gig economy will have to adapt -or perish. 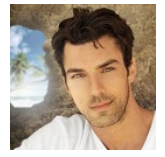 Stevan Mcgrath, is a Bitcoin and cryptocurrency enthusiast, passionate about the potential these tools and blockchain technology bring to the world and writes consistently. He has been following development of blockchain for several years. To know his work and more details you can follow him on Twitter, Linkedin, Facebook.


Disclaimer: This is a guest post. Content of the article is author's work and opinion. It should NOT be viewed as an investment advice by EtherWorld.co. Readers are suggested to do their research before investing into any project.