Incentives of being Ethereum Validators

The Ethereum blockchain is a permissionless blockchain with cryptographic security. The blockchain currently uses a fairly straightforward Proof of Work consensus algorithm, where miners are paid fees for incorporating transactions in their blocks as well as block rewards for constructing blocks that are added to the chain. Transaction fees are paid with already issued coins, while block rewards are derived from newly minted coins (issuance). No specific in-protocol penalties or sanctions exist.

But after the merge transition, there will be a change to the consensus mechanism of the underlying protocols, Ethereum blockchain will operate on the Proof of Stake consensus protocol, in which validators will take the place of miners and receive a variety of financial incentives to encourage their desired participation for network security, such as publishing beacon blocks and timely attestations, but this also has a catch. Validators had to stake ETH on the blockchain in order to become validators. These modifications are intended to increase the network's security because there will be far more rewards than ever before for validators and penalties for those who don't abide by the rules.

We will talk about the economic rewards and penalties that the validators will experience following the merge transition. Generally speaking, they fall into three categories:

(1) incentives for following the protocol's rules

(2) Sanctions for actions that violate protocol

(3) Penalties for actions that appear to violate protocol

Rewards are simply new Ether that is created and added to validators' beacon chain balances as rewards. Every payout is tiered in accordance with a validator's actual balance. This illustrates how a validator's influence (weight) in the protocol is closely associated with its actual balance. As a result, if your effective balance is 24 ETH, you have a lower chance of being chosen to join a sync committee or submit a block than a validator with 32 ETH. 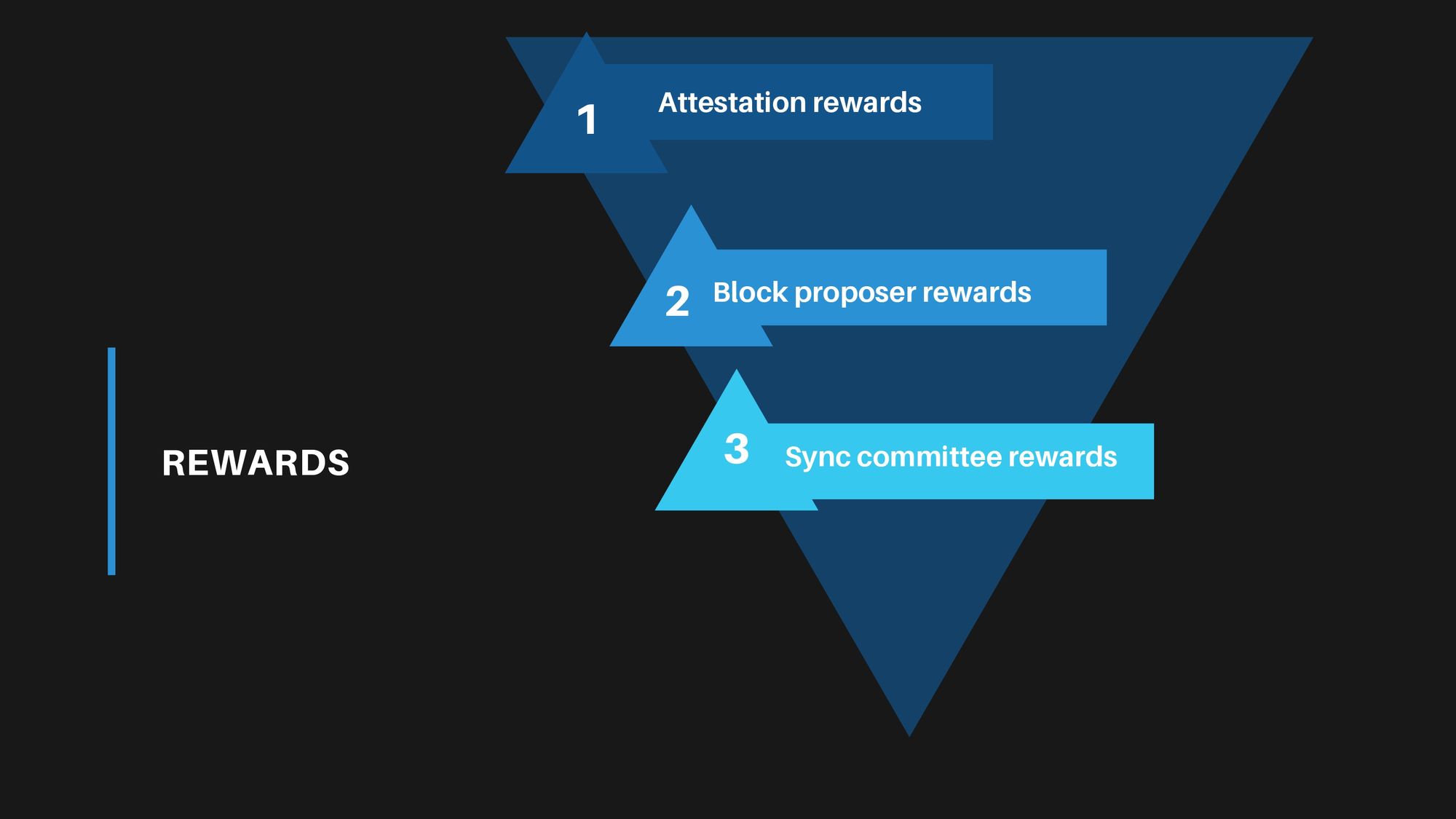 Every epoch (6.4 minutes), Ethereum validators are rewarded for their participation. They are given incentives that are multiplied by a sum known as the base reward. For accurately voting on (or, in the lingo, attesting to) each validator receives one base reward.

How is the base reward determined?

The level of base reward is tuned to encourage a validator set of the proper size and is based on the number of active validators on the network. Without giving out more issuance than is necessary, we wish to encourage a sizable number of validators to join the validator set. In order to attract more validators if there aren't many of them already, the protocol must provide a high return. However, the protocol can afford to pay less and save on issuance if there are already a lot of validators. The function used by the beacon chain to accomplish this divides the reward level by the square root of the amount of Ether that is presently being validated (the use of an inverted square root is explained in more detail in Vitalik Buterin's design rationale document).

While the block reward does not affect the overall amount of Ether distributed to validators, it does indicate that the block creator will receive a share of the available reward. One validator, chosen at random, is in charge of producing a block for each slot (a slot lasts 12 seconds; there are 32 slots in an epoch). The other validators' beacon chain attestations are collected in the block, and the block producer is compensated with a percentage of the inclusion rewards from the attestations that are included in the block. To maximize their earnings and the income of all the attesting validators they include, block producers have an incentive to gather as many legitimate attestations as they can for the block.

How is the Block Proposer reward determined?

The PROPOSER REWARD QUOTIENT constant, which has a value of 8, controls how much of the inclusion incentives go to the block producer in the beacon chain specification. The block producer receives 1/8 of the inclusion reward (or 1/32 of the entire per-epoch payout), while the validators whose attestations are included in the block receive 7/8. This reasoning also holds true for the sync committee proposers.

The sync committee is composed of 512 validators who are chosen once per 256 epochs (27.3 hours). This will happen infrequently for any particular validator; with 300,000 validators, the anticipated time between selection for duty is roughly 22 months. The incentives are generally quite substantial throughout the 27-hour participation period, though.

Every time a member of the Sync Committee completes their tasks correctly, they are rewarded.

Validators are rewarded for adding to the security of the chain and penalized for not doing so. Penalties reduce the net issuance of the beacon chain by deducting them from validators' balances on the chain and thereby burning them. These are frequently conflated with "slashing," although the phrase refers to a validator being removed from the protocol and having some or all of their stake taken away for committing very specific misbehavior. The severity of the penalties will be very less. 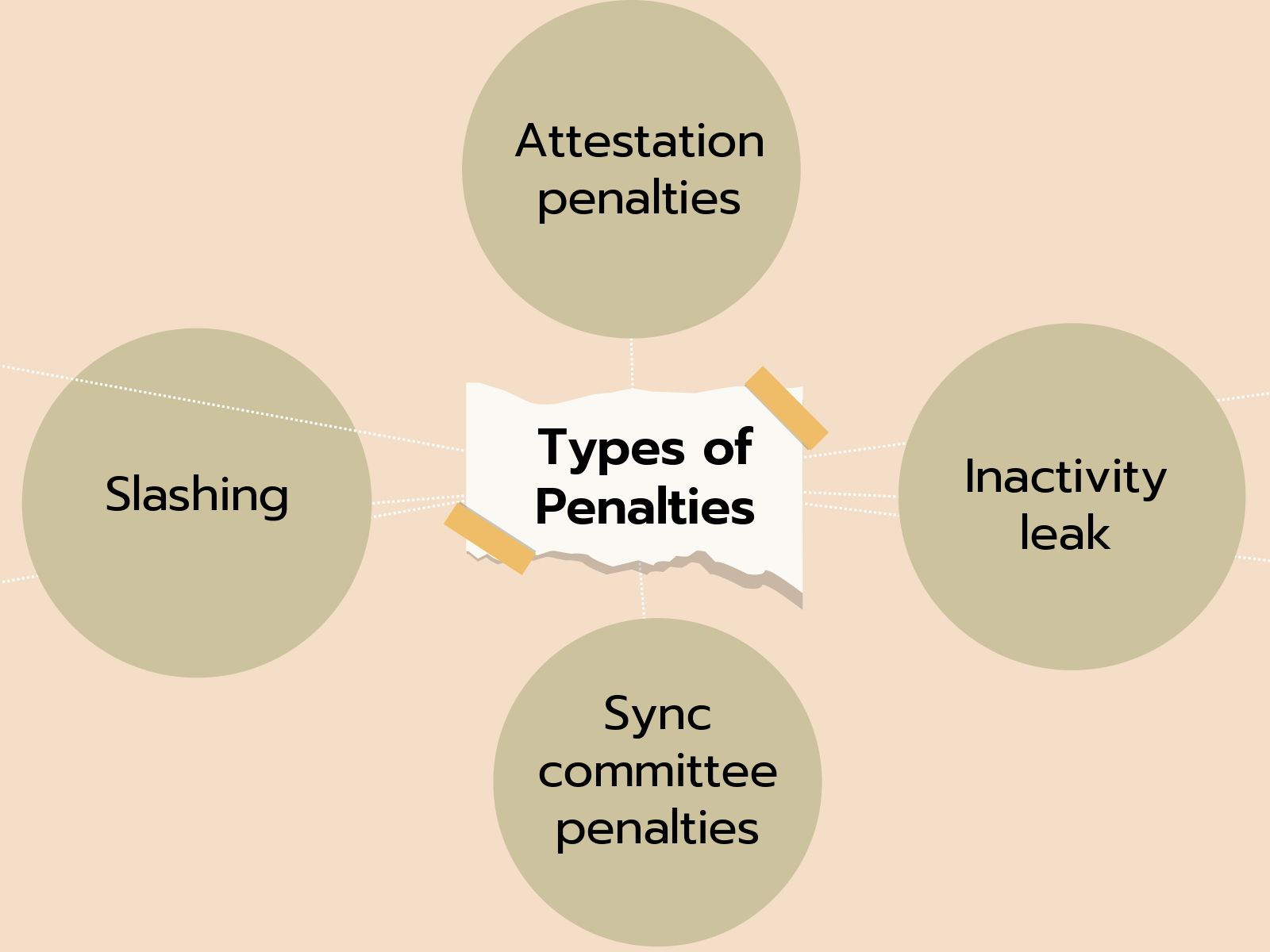 There are consequences for incomplete, inaccurate, or late attestation. Your validator votes for the Casper FFG source and targets every epoch (6 minutes), and if it commits any of the aforementioned errors, a tiny penalty is assessed, i.e. a small amount of ETH is taken from your validator's balance.

As was previously said, only 512 validators are chosen at random to serve on the sync committee; for each slot in which they certify the right head block, they are given a reward.

Participating validators who sign the incorrect head block or fail to show up at all are penalized an amount equivalent to the incentive they would have received for being right. Additionally, the block proposer gets nothing for the contribution that was not made.

In a form of emergency situation known as the inactivity leak, incentives and punishments are altered as follows.

when more than one-third of validators go offline, this is when loss of finality (liveness of the chain) is discovered. A majority vote from validators representing two-thirds of the entire stake is necessary for finality. The stakes of validators who are not attesting are steadily reduced by the inactivity leak until, eventually, the participating validators own 2/3 of the remaining stake. After that, they can resume finalizing checkpoints.

The chain will be long-term protected from catastrophes by this inactivity penalty mechanism. It is assumed that this is a fair outcome for any issue that can't be resolved in a few weeks. The upshot might be that the beacon chain permanently splits into two independent chains each side of a network divide. The beacon chain technically favors availability above consistency in this way.

The amounts subtracted from validators' beacon chain accounts due to the inactivity leak are effectively burned, reducing the overall net issuance of the beacon chain.

Slashing happens when validators submit attestations or block proposals that could be considered chain attacks while violating very precise protocol constraints. Being sliced entails forfeiting a substantial stake and being removed from the protocol. More "punishment" than "penalty" is involved.

Stakes for validators can be slashed for two different actions:

There are two kinds of penalties these validators have to pay-

The validator's account will first be charged a penalty of 0.5 ETH. The validator has a 36-day withdrawal ability epoch and is queued for exit along with the initial penalty.

The slashed validator is set to get a second penalty at the halfway point of its withdrawal ability period (18 days after being slashed), which is determined based on the total amount of stake that was slashed during the 18 days both before and after the validator was sliced.

In order to maintain the decorum of the chain, there are various rewards which are given to the validator who reports slashing or any malicious behaviour along with the above-mentioned rewards.