Hyperledger Besu is an umbrella project of open-source blockchain protocols and tools that was started by the Linux Foundation in 2015.

In this post we are going to talk about

What is Hyperledger Besu ?

Besu is a java-based Ethereum client that applies EEA (Enterprise Ethereum Alliance) and can be run on the public or private networks and many testnets such as Rinkeby, Ropsten, Goerli etc. EEA is a worldwide community of blockchain developers, innovators, adopters from around the globe to collaborate and bring solutions that benefit everyone.
PegaSys, the protocol engineering team at ConsenSys, has been the primary contributor and maintainer of the codebase at the core of Hyperledger Besu since its launch in November 2018 as Pantheon. They built this Ethereum client with the goal of lowering barriers to entry for enterprises and maintaining and scaling mainnet.

Besu's design and architecture have been made by aiming at clean interfaces and high modularity. This makes the components easier to upgrade and implement.
Besu , previously known as Pantheon, joined Hyperledger in 2019.

Want to become an Eth1 validator in Besu? Have a follow-up here.

Client is a piece of software designed to implement the Ethereum protocol address for specific use cases.
Here are some of the features of Besu:

Previously Hyperledger Besu, or simply Besu, used "Forest of tries" to store Ethereum's complex and vital state.
"Trie" is a Data Structure when strung together as trees, looks like an Ethereum Blockchain at a point of time.

As the state gets larger, reading and writing on the network takes more time. It can even cause storage challenges among the nodes that run on Ethereum for day-to-day use. Over time, storage overhead accumulates and can make running nodes prohibitively expensive to those without specialized or expensive hardware. Here comes Bonsai Tries.

Bonsai Trie is an experimental storage format and marks a major change in the ecosystem. It is Hyperledger Besu's next-generation storage layout designed to address some of the concerns. It provides a minimal impact to full sync while allowing full historical transaction execution capabilities with large savings in space. This approach also limits the long term growth of a full node.

Bonsai Tries uses flat account storage and a Trie Log Layer for instant read access to information, only traversing the tries as needed.
Bonsai stores leaf values in a trie log, separate from the branches of the trie. Bonsai stores nodes by the location of the node instead of the hash of the node. Bonsai can access the leaf from the underlying storage directly using the account key. This greatly reduces the disk space needed for storage and allows for less resource-demanding and faster read performance. Bonsai inherently prunes orphaned nodes and old branches. 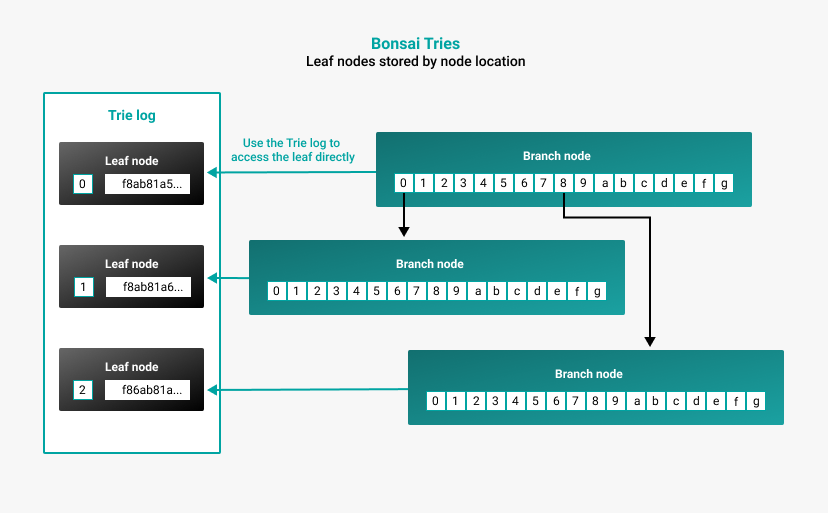 Why use Bonsai Tries rather than Forest of Tries ?

To know more about the storage requirements and how does Bonsai curb the storage, watch this video.

ConsenSys’ partnership with StarkWare (ZK-rollup to Infura and MetaMask)