Ethereum Foundation Research team organized the 9th edition of AMA (Ask Me Anything) Series on Reddit. This is the first developers AMA of 2023 featuring Ethereum Roadmap & Network Upgrades . Ethereum developers also discussed Privacy , Adoption and MEV. In this article, we will look at the best questions and responses shared by the EF Research team.

What parts of the Roadmap should Ethereum developers focus on once Withdrawals and EIP-4844 are released?

According to Vitalik Buterin, Wallet Security (mainly through EIP-4337 & Account Abstraction) and Privacy (through ZK Privacy Solutions & Stealth Addresses) are the two main non-scaling related problems. Otherwise, he would love to see a massive push towards making it cheaper to verify the chain, i.e., the central theme of The Verge. 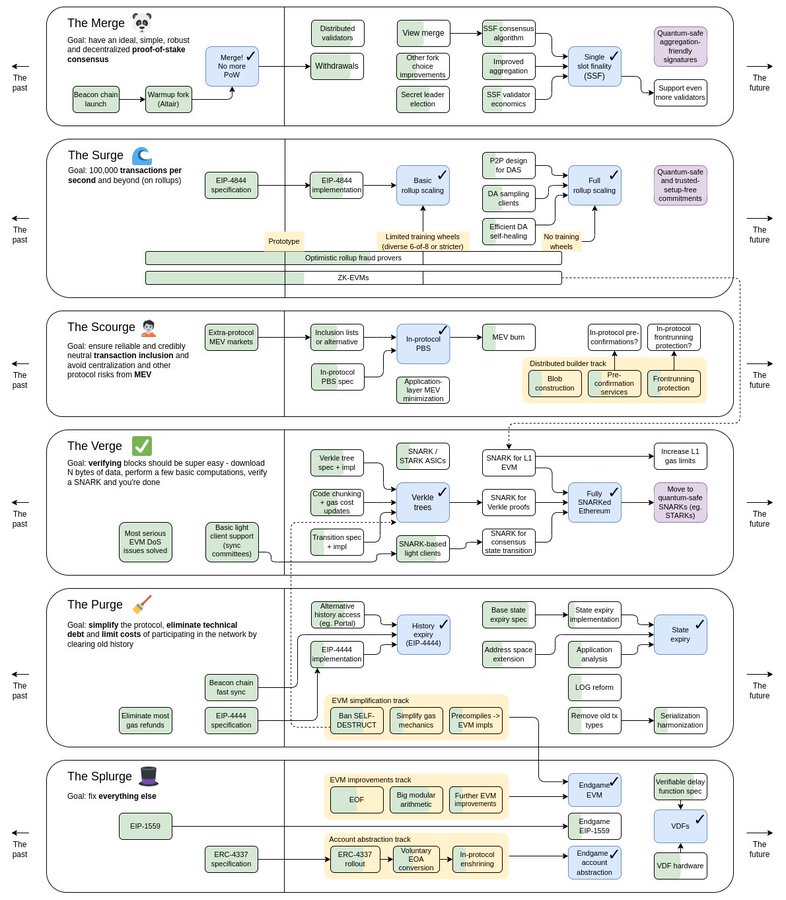 With EIP-4844, if data is deleted after a month, how can the subsequent transactions be validated?

The good news is that data storage and retrievability is easy, as we need one entity in the world to store and serve the data after it's been made available. Whether or not this data is stored by Ethereum full nodes and retrieved via the Ethereum p2p network is a relatively minor implementation detail.

This data can be stored and retrieved anywhere and by anyone, including on BitTorrent, on IPFS with Filecoin, on Portal, and even on centralized servers owned by explorers, exchanges, rollups operators, archivists, enthusiasts, etc. So again, we only need one entity to store and serve the Ethereum history for long-term retrievability. The "instantaneous" property of data availability is the hard part.

Do you guys think that when rollups can process dozens of thousands of transactions in the future, some of them may offer free tiers? (for example, on Optimism, the first ten transactions each month are free).

According to Vitalik Buterin, this is a great use case for something like UBI Coin. Realistically, such projects, unfortunately, will not be able to get the economic scale to offer people enough coins to pay for food and healthcare, especially if they succeed at scaling to many millions of people.

Still, they will be able to give a UBI large enough to cover people's transaction fees. Furthermore, this could make Ethereum non-financial apps (e.g., ENS, SIWE, POAPs) significantly more accessible to many people worldwide who do not have easy access to cryptocurrency exchanges.

What is the current roadmap for limiting the number of (active) validators?

What are your best learnings (pros & cons) from The Merge that developers will carry forward to future milestones?

Will any security features be enabled when Withdrawals are enabled to make Ethereum Secure?

Readers can take a look at EIP-4736 and Consensus Layer Withdrawal Protection. EIP-4736 adds additional security for a change withdrawal address operation when a consensus layer mnemonic is compromised without changing consensus. In addition, users can submit a pull request with their Ethereum validator change withdrawal credential message to have the CLWP community broadcast it as early as possible for security.

How will privacy be addressed in Ethereum's long-term future?

Because private VMs (e.g. Aztec) and private applications (e.g., Tornado Cash) can be built on top of the EVM, there is no need for the L1 EVM to provide functionality tailored to privacy. As a side note, privacy tools are used sparingly within the L1. Two exceptions are:

Would encrypted mempools mean builders and proposers wouldn't even know what they include in a block?

At a first approximation, the Answer is Yes. Encrypted mempool R&D is progressing fast. See this recording and slides. Arbitrum and Shutter have designs based on threshold encryption, FlashBots has an SGX design, i.e., SUAVE, and StarkWare has played with time-based encryption, i.e., VeeDo.

How can Ethereum help a person who finds his bank extremely trustworthy, and his payment app is perfect, scans QR codes, has zero fees, and instant transactions?

Ethereum allows for permissionless innovation. According to Vitalik Buterin, there are some practical ways of using Ethereum:

What year do you estimate that the average consumer will use cheap/frictionless payments on L2 with similar ease as ‘tap to pay’ or Apple Pay?

Layer 2 usage will ramp up substantially over the next couple of years. The competition and business development amongst the teams might become fierce as they try to onboard non-crypto-native applications and users. At that point, blockchain applications will be increasingly "normal" for younger generations. Then over the next 2 to 4 years, bigger applications will continue to adopt. This will take around ~5 to 8 years.

What steps are you guys taking in consideration for Ethereum to become more like the "new Internet" and not so much like Linux?

If Ethereum wants to have a fighting chance of winning significant end-user market share, then it needs to solve three big problems:

Do you guys think there is a viable solution for the MEV censorship problem, or do we have to accept that x% of the validators will always comply with the US sanctions?

A censoring builder would have to continuously burn exponentially more of their ETH to keep outbidding non-censoring builders, and censoring validators will miss out on MEV present in non-censoring blocks if they don't want to propose that block (with the burn auction proposed in MEV burn, they will always get outbid, unless they're willing to burn more, which makes no sense economically). Eventually, the cost of censoring transactions will far outweigh the rewards of validating and block building, so censoring parties will not participate.

What is the current status of MEV burn, and when do you expect it to go live? Do you expect pushback from stakers similar to what miners did to block rewards reduction and the merge?

According to the response by from EF Research Team, Developers want to do Proposer Builder Separation (PBS) first, then a proper MEV burn design. Also, burning the MEV doesn't affect per-validator APR.