Goerli Shadow Fork 5 is back to 95% participation

Goerli-shadow-fork-5 merged successfully and has a partcipation rate of 95% now.

Post merge there were some unhealthy nodes, but they all self-healed in an epoch.

Some of the problems were by Prysm-Nethermind and Teku-Nethermind nodes. The Teku-Erigon node had self healed and came back online. 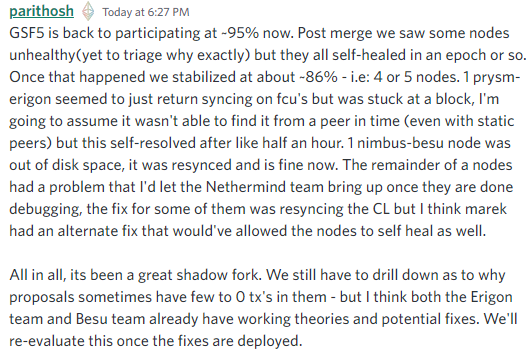 Currently, the memory consumption of the EVM is limited in two ways: a quadratic memory expansion cost and a de-facto call stack depth limit. These mechanisms are reasonably effective at their desired goal, but are both needlessly complicated and inefficient, punishing regular users too much and DoS attackers too little.

Lighthouse is a leading open-source Ethereum consensus client, written in Rust which is primarily focused on security & performance.

This release is low-priority for mainnet users and contains the parameters required for the Goerli/Prater merge.

Users on Prater must upgrade before the 4th or August, otherwise they'll miss the merge transition and stop following the canonical chain. Therefore, this is a high-priority release for Prater users!

This release is low-priority for mainnet users. However, it contains the Goerli/Prater merge params.

Upgrade before the 4th of August or miss the Goerli merge transition!

Read the release notes for info about breaking changes.https://t.co/x2VWY3iCmi

On-chain data shows around 800k ETH has exited wallets of the crypto exchange Gemini, a sign that could prove to be bullish for Ethereum.

As pointed out by an analyst, the Ethereum exchange reserve has plunged down to lows not seen since 2018.

Mojang, the microsoft owned studio behind one of the most popular games, Minecraft, stated that it has no plans to support NFTs in the game.

Epic Games CEO, Sweeney was asked by a Twitter user if Epic would be taking a similar stance and this was his response:

"Developers should be free to decide how to build their games, and you are free to decide whether to play them. I believe stores and operating system makers shouldn’t interfere by forcing their views onto others. We definitely won’t."

hey @EpicGames it’d be really nice to see the same opinion from the epic games store. please get rid of every last one of those games on the store @TimSweeneyEpic https://t.co/lTXX0x1MFg

A Guide has been released for Ubuntu users who wants to setup a node to participate in the last Testnet merge before Mainnet merge.

This guide uses Geth as an execution layer on Goerli and Teku as a consensus layer on Prater. 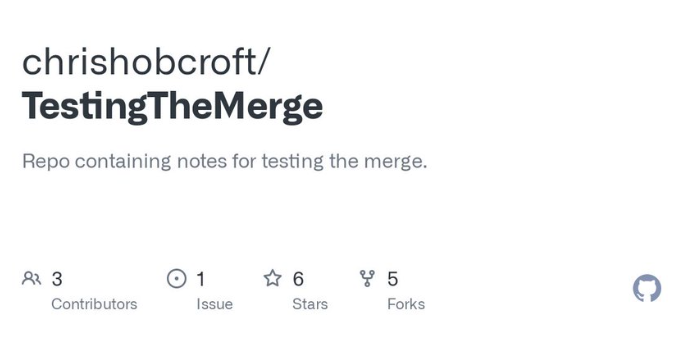 You can find the guide and the Github Repository here.

Uniswap is going deep in the NFT rabbithole.

The automated market maker is integrating decentralized NFT marketplace Sudoswap to allow for efficient NFT swaps when it launches its NFT platform.

Automated market makers allow digital assets to be traded automatically using liquidity pools rather than a traditional marketplace that needs to match buyers with sellers.

This integration will allow users to purchase NFTs using the Uniswap platform while accessing the on-chain liquidity offered by sudoAMM.

The news was shared by Scott Gray, head of NFT product at Uniswap Labs.