Eth2.0 (Phase 0) is going to be live soon as the deposit contract successfully reached to its threshold 524,288 ETH limit. The clients are expecting the mainnet launch on December 1 at noon UTC.

Ending all speculations on when ETH2, the Ethereum community is excited to vision the launch soon. The Eth2 beacon chain network has reached the minimum 524,288 ETH and 16,384 validators to launch mainnet. The Eth2.0 genesis is now officially a week away left. As per the plans, Eth2.0 genesis is all set to trigger on December 1, 2020 at 12pm UTC.

The team of Eth2 felt extremely emotional and thanked validators and contributors to show support in the network.  Hsiao- Wei Wang, R&D team member for Eth2 community called it a ‘history’ and did not forget to even thank the critics.

The EF announced the contract deposit on November 4 and the Ethereum community achieved the milestone just in 20 days. According to the pattern, the deposit contract peaked from November 20 and kept on accelerating with highest deposits made 24 hours away from November 24. 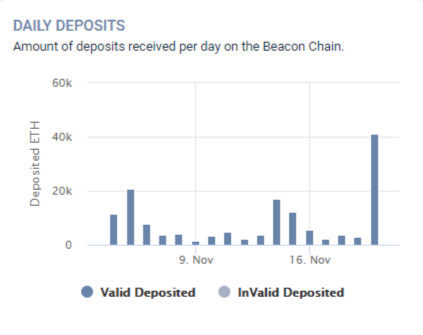 Reaching the minimum requirements for the contract deposit has opened doors for introducing the long-awaited beacon chain with Phase0 launch. The community is eager to shift from PoW consensus to PoS consensus network in the upcoming time.

The contract deposit address was made public on November 4, 2020 by Danny Ryan. The EF team on November 18 announced the launch of its public testnet, Pyrmont just a week ago. Pyrmont was intended to replace the Medalla testnet due to technical errors.  Pyrmont genesis started with 100,000 validators, about 160 beacon nodes and more than 250 signatures per second produced in total.

Ethereum2.0 has garnered massive support from within and outside the community. The support and trust of the community is so evident that even after the threshold limit has been timely secured,  687,776 ETH is already staked and still counting higher.

All the four mainnet clients- Teku, Nimbus, Prysm and Lighthouse agreed upon the genesis and that it will happen on December 1.  Consensys gave support to the upcoming Eth2.0 network and congratulated the community for reaching the record- breaking threshold.

The EF team was all prepared for every ups and downs in the process of reaching the genesis. Plan B was already decided. Hudson Jameson explained the before and after process with all possibilities. The beacon chain release is one of many stages of transition to Eth2.0. Phase 0 will only unlock the PoS feature for the community followed by sharding which will take some time to launch. Overall, the efforts put in by the team of community miners and developers is worth a praise.