Ethereum Muir Glacier is successful! About 92% of the nodes are in sync. Nethermind syncing issue, Muir Glacier NFT collectible, Ethereum-Parity attack and more...

It was a challenge for the community to bring the nodes-readiness percentage over 50% in the given time period. The Ethereum Cat Herders, aka the Ethereum Support Desk in association with the hardfork coordinator, initiated communication with community and infrastructure providers to achieve the target. At the time of publishing the report, about 92% of nodes are in sync with the latest client version.

Ethereum Muir Glacier upgrade is successful for all other clients except Nethermind.

Nethermind nodes are rejecting blocks after the fork facing some challenges migrating to the upgraded network. The team is working on it and hopefully, Nethermind will be in the sync soon.

Exhibiting community engagement, James Hanacock who has been appointed as the hardfork coordinator recently by the Ethereum Foundation, announced the distribution of limited edition NFT commemorating the launch of Muir Glacier. 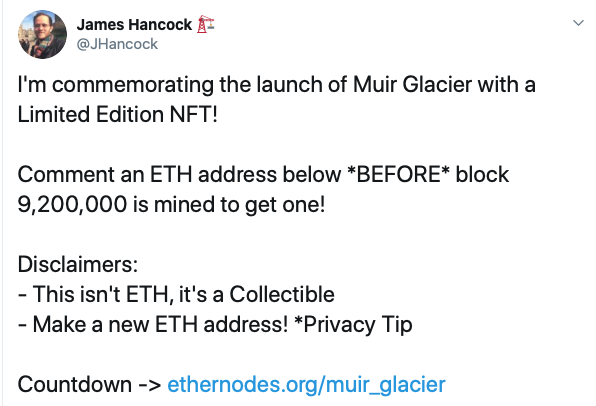 Most of the clients, including Geth and Parity, released the 'Muir Glacier' ready versions by the first week of December, which allowed less than a month for the community to upgrade nodes. The continuous communication effort made the mission successful and by December 31, 2019, about 65% of nodes were synced and ready for the upgrade. But then reports of some Parity Ethereum nodes not syncing surfaced and team visualized an attack underway. As an immediate action, announced by a blog, Parity released a stable protect client version against this attack and advised to upgrade irrespective of experiencing issues. By the time of upgrade, about 98% of Parity nodes were synced, which is a big success for the team to be achieved in less than 48 hrs.

About two weeks before the commencement of the upgrade, Parity announced the transitioning of the maintenance of Parity-Ethereum code to OpenEthereum DAO. Some change in the statics of Ethereum-Parity nodes is expected in the future.

Proposed in late November, the EIP 2384 leads to the delay of the difficulty bomb aka Ice Age on the blockchain, which is the only improvement brought by this upgrade. Read Muir Glacier upgrade to learn about the latest client version to upgrade.

Muir Glacier was scheduled in less than a month after the Istanbul upgrade, which is unusual in the Ethereum community. Historically, each planned upgrade network upgrades typically take at least 6-9 months to deploy on the main network. But, under special circumstances, this special 'Single EIP upgrade' is set into the motion.

‘Crypto-Currency Act of 2020’: a bill to regulate cryptocurrency in the United States