"Blockchain for Sustainable Development”, a session on blockchain @United Nation

Big turn out was observed at the Blockchains for Sustainable Development session at UNCTAD World Investment Forum #WIF2018; $5 million award for the 5 most promising blockchain-for-good projects; Blockchain Charity Foundation launched by Binance

10th anniversary of The World Investment Forum is being celebrated from 22 to 26 October 2018, at the Palais des Nations in Geneva, the United Nations Headquarters in Europe and an international business, economic development and diplomacy hub. The World Investment Forum (WIF2018) provides a global platform for engagement and dialogue on emerging and key issues related to investing for sustainable development.

Day 3, brought a three hours long discussion on blockchain. Organized with the Institute for Leadership and Sustainability (IFLAS), University of Cumbria, the event discussed ideas on how to increase the positive impact and minimize the negative effects of blockchain technologies on investment for development. Big turn out was observed at the #Blockchains for Sustainable Development session at UNCTAD World Investment Forum #WIF2018.

Issues for the debate

"I remember being looked at like a lunatic when I was in Davos at @wef talking about #blockchain opportunities. "Six years later, here we are at the @UN. I might still seem like a lunatic to some, but at least I’ve got a bigger crowd," said Jem Bendell, of @CumbriaUni. "One week, mass media tell us blockchain will save the world. The next week, they tell us it might destroy the world. But it’s not the technology that will help or harm humanity. It’s the intent and context in which it's used," he said.

Blockchain technology has evolved rapidly over the past few years. It has become the game-changing technology that has not only revolutionized global payment systems but also improved access to finance, supply chain management, digital identities or land registries through various DApps built on top of major blockchains. This impact goes beyond traditional financial services and has affected almost every industry.

“Very few technologies have more potential for disruption and excitement than #blockchain…if your somebody who cares about making the future a little less uneven,” Chris Fabian of @UNICEFinnovate says at #WIF2018.

Money right now comes from governments, but we're on the cusp of a new era where money will come from the people, says Bancor co-founder Galia Benartzi. "It's the application of blockchain, I find most fascinating.”
"It’s unlikely that the money system that created the need for the #SDGs is the same monetary system that will be able to solve them,” We must think out of the box, she added.

The event was live on Bancor. 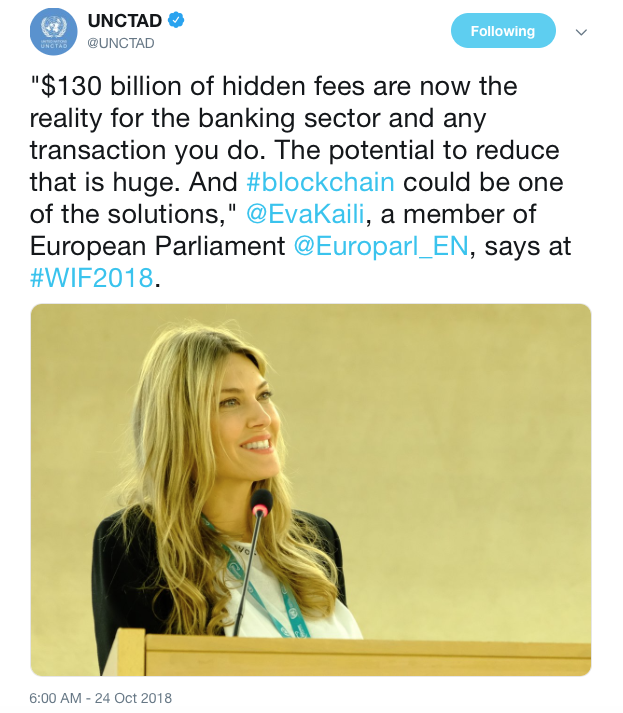 Well, this could be one of the best way to describe scenario of banking system at present and the need of blockchain. Eva Kaili further announced that $5 million will be awarded in January 2019 to the 5 most promising blockchain-for-good projects.

Binance CEO Changpeng Zhao launched a new platform - Blockchain Charity Foundation, that uses blockchain technology to track donations, allowing people to see where their money goes and who benefits. "With better transparency we can achieve 100 times more results," he said. 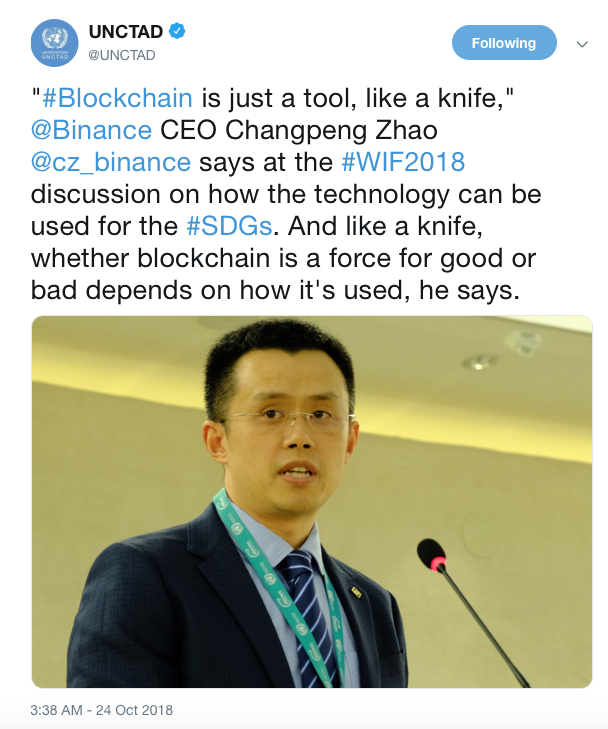 “For the 17 #SDGs, there is one underlying problem we’re trying to solve: transparency,” Binance CEO Changpeng Zhao says at the #WIF2018 discussion on how the technology can be used for the #SDGs. "#Blockchain has many benefits but ‘transparency’ is the one word I want people to remember today.”

Blockchain is an open source technology. Let's hope these sessions and discussions make a positive impact on Government and they will be willing to consider this revolution with open minds.