In the latest Ethereum Core Devs Meeting #151, core developers decided Shanghai's roadmap and scope. This was the last ACD Call of the year. In this article, we will get a complete overview of the features, EIPS, testing and timeline of the Shanghai upgrade.

The most important part of the ACD call was to get a clear scope of the Shanghai upgrade.

Péter Szilágyi said that developers should include EIP-4844 alongside withdrawals. According to him, Withdrawals bring nothing to make Ethereum better and Scaling Ethereum is more important than Withdrawals. Also, the CL client teams agreed to work on withdrawals separately from their work on EIP-4844.

Lastly, Developers agreed that EIP-4844 wouldn't be in Shanghai, it would be the main thing around which they will center the next EL upgrade as well, and they should get this upgrade out relatively quickly after Shanghai.

If these bars aren't met, then EOF EIPs will be removed. 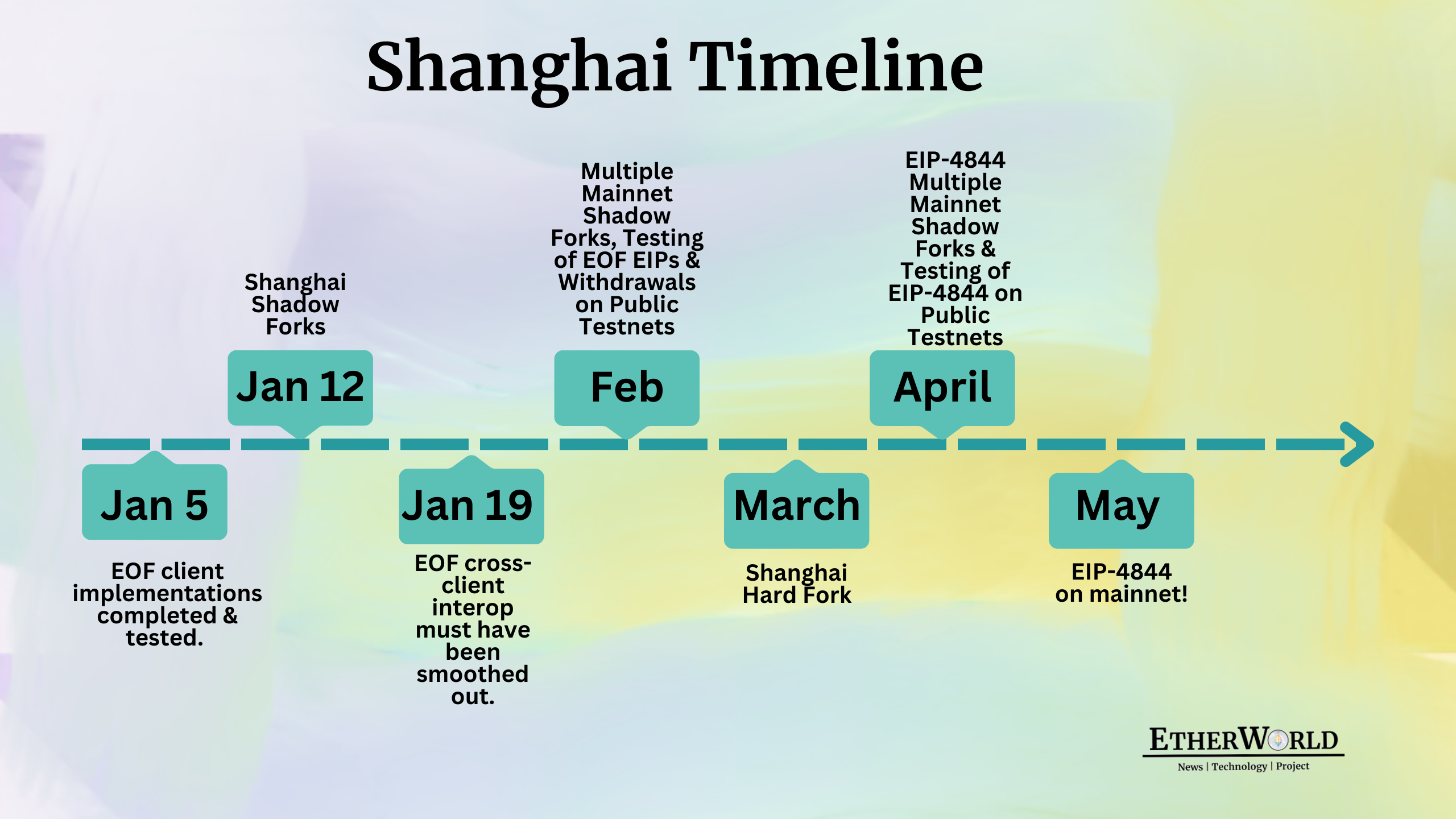 As discussed in the ACD Call, developers have agreed to move forward with all previously included EIPs in Shanghai, i.e.,

In addition to above EIPs, they have also agreed to include the following 5 EOF EIPs listed below, if they do not delay withdrawals significantly.

Shandong Testnet, i.e., a Pre-Shanghai Testnet, was launched on 13th October 2022. A set of selected Shanghai-considered EIPs is selected for early client testing on this Testnet. Gajinder Singh from EF JavaScript Team and Paritosh Jayanthi from EF Devops Team are the core developers behind Shandong Testnet. Developers have used it to test multiple Shanghai EIPs, including withdrawals in late November.

Withdrawals are working smoothly in both of these cases, but there are some issues to be fixed with the withdrawal credential upgrades from BLS to ETH addresses. Developers will be focusing on post-merge testnet in the long run. Full and Partial Withdrawals are tested and successfully working on both testnets.

He further added that developers are likely to start a public testnet from 15th December. Mario Vega has shared a WIP list with the various test cases.

axic.eth and lightclients have created a Unified EOF specification to understand the various changes the EVM Object Format is proposing.

Developers will ensure that all EOF implementations are completed and all functionalities are well tested. They will meet on the 1st ACD Call of 2023, i.e., 5th January, to check if everything is ready. Shanghai Shadow Forks will start from Mid January. Multiple Mainnet Shadow Forks will be continued in February. Furthermore, Developers will do testing of Withdrawals and EOF EIPs on public testnets in February 2023.

Mikhail Kalinin talked about the Engine API Improvement Proposal. He explained that there are two parts to this proposal.

Here is an article by EW Team on Engine API Improvement Proposal for readers who wish to know more.

Trent Van Epps gave quick updates on KZG Ceremony. This is an important step in running EIP-4844 and Danksharding in the coming future. He also talked about how people can participate and contribute in KZG Ceremony.