EtherDelta, an Ethereum based decentralised cryptocurrency exchange has undergone ICO process and its token EDT has been listed as a digital asset on Coinmarketcap

EtherDelta Token (EDT) is added to coinmarketcap.com, surprised?? Yes, EtherDelta, an Ethereum based decentralised cryptocurrency exchange has undergone ICO process and now its token EDT has been listed as a digital asset on Coinmarketcap. 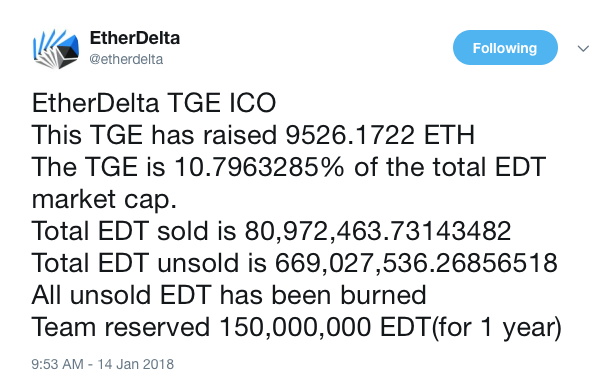 Total EDT circulation after burning is 830,972,463.73143482 as mentioned in twitter. Clearly, the only exchange which is available for trading of EDT is EtherDelta. EDT acts as the token that http://Etherdelta.com will keep repurchase through the company's 100% profits！

According to coinmarketcap.com, EDT is currently trading at $0.072. However, info on market cap and circulating supply is not available.

Even the data provided is not adding up.

What Makes IoT Chain the IOTA of China? Decentralizing the Internet of Things (IoT)