In recent days, we are witnessing the mainstream adoption of cryptocurrency. It is being used for trading goods and services across the world. Bitcoin is the most accepted currency among the list.

To increase the alternatives for cryptocurrency users, Monero today announced Project Coral Reef. It is a project to help further mainstream adoption of Monero in association with with Naveen Jain.

“There’s a really significant Monero community that doesn’t have a lot of opportunity to spend their Monero on things that are really cool and exciting. This product solves that problem. There’s also a challenge of just raw awareness of Monero, so it’s the start of that initiative”, said Naveen Jain, a music industry veteran.

Monero, an open-source and decentralized cryptocurrency is secure, private, and untraceable. "With Monero, you are your own bank. Only you control and are responsible for your funds. Your accounts and transactions are kept private from prying eyes", says the official website. At present, Monero is 9th popular cryptocurrency based on market capital.

With the announcement of the Project Coral Reef, the price of Monero (XMR) has reached alltime high. 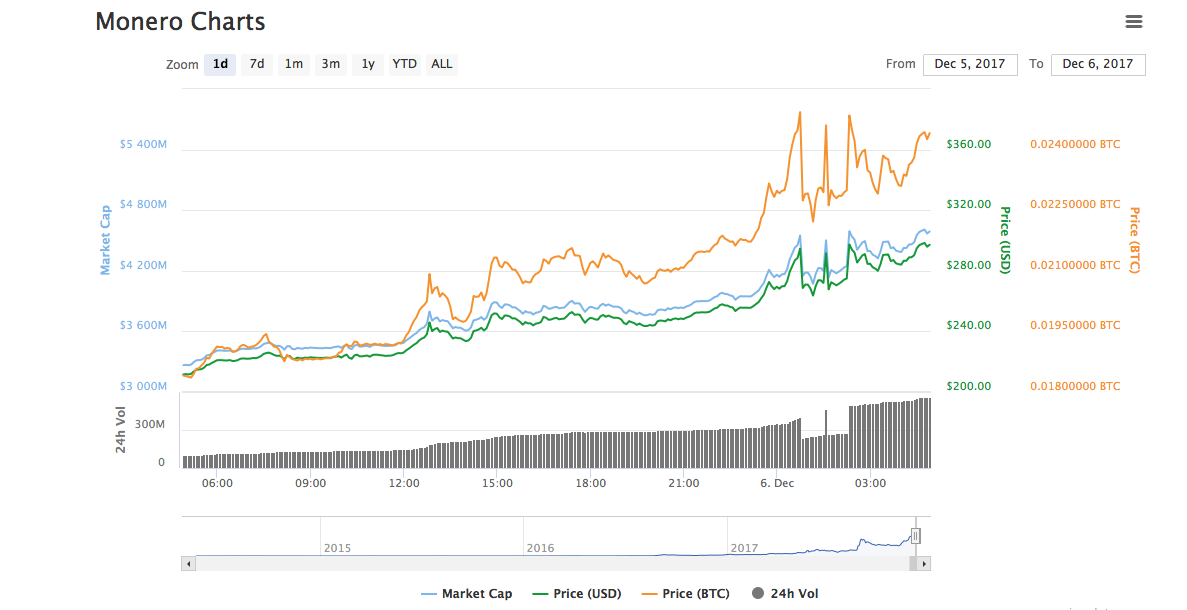 In few hours, it's price increased from $211 to $297 adding a billion dollars in market cap to make it $4.6B. This may keep continue to rise depending on the user response to the new project.

“As cryptocurrencies become more popular, it’s important that my fans have choices when it comes to how they buy my songs and merchandise,” said G-Eazy, the Billboard chart-topping rap star from Oakland, California. “Given Monero is one of the safest, most secure and most private cryptocurrencies, it’s one of the best options for my fans this holiday season — and just in time for my new album.”

Due to increased rate of transaction charges in Bitcoin and with the recent popularity of digital currencies, many ecommerce store are looking for alternative currency, Monero can be the one to breach the gap. Hopefully, this news add in celebrating holidays and brings lot of happiness, joy to Monero lovers.