Is Wikipedia working on integrating Brave/BAT for donations?

An email from Wikimedia Foundation Inc. is viral on social media about 'Wikipedia working on integrating Brave/BAT for donations'.

dragespir , a redditor shared a letter today on reddit, which he claims to have recieved in response to his email from Donor Services Associate, Wikimedia Foundation Inc. It suggests that they are working on integrating Brave/BAT for donations.

Users who read wikipedia using the BAT browser can donate automatically a percentage of their monthly budget or based on how much time they spend on the site. Users earn towards their budget by viewing ads on websites (or by buying BAT if you want). Basically, this automates the donation process that Wikipedia uses to fund the site without ads. It would be a huge win for them if it takes off since they often struggle with funding from what I understand, explained w3aponofchoice.

Basic Attention Token (BAT), announced in May 2017, is introduced by Brave Software is a digital asset for decentralizing the digital advertising industry based on Ethereum blockchain. It is introduced by the creator of JavaScript and the co-founder of Mozilla and Firefox, Brendan Eich. BAT had an ‘electrifying’ crowd-sale that literally ended in 3 blocks. Fun fact: The average transaction fee of Ethereum is $1 (at that time), but a $2220 transaction fee was used to cut in line in BAT ICO.

Community has different opinion about this collaboration. Some believe that it is difficult to force user to use BAT as it needs Chromium extension. Whereas, a few believe that it could be a successful one, as just after the ICO, BAT being in beta phase enabled micro-donations to more than 150 verified publishers.

There's also a decentralized wikipedia being built on Ethereum called Lunyr. Lunyr is an Ethereum-based decentralized world knowledge base which rewards users with app tokens for peer-reviewing and contributing information. It aims to be the starting point of the internet for finding reliable, accurate information. As informed by another redditor, its public beta is Jan 30th.

The authenticity of news is NOT verified. So far, neither BAT nor wikipedia has announced any such integration. Whether being hype or an in-progress discussion, it helped pumping BAT. It recorded more than 7% increase in price in past 24 hrs when 80% market is in red. 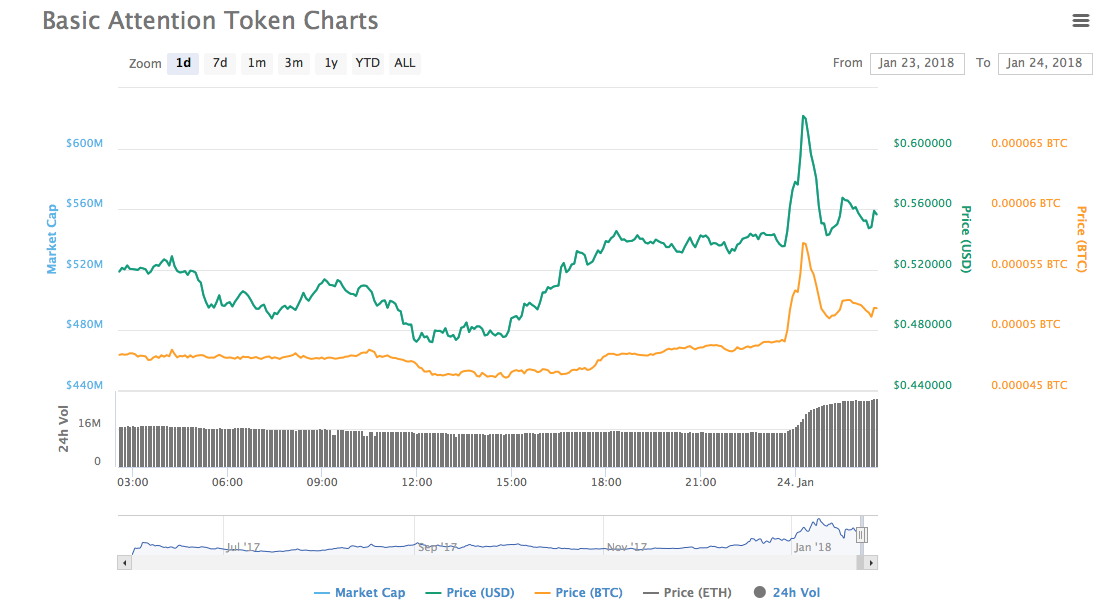 PS: This is NOT an investment advice. Readers are requested to conduct due research before investing into any project.

Stripe will end supporting Bitcoin, may add other cryptocurrency