Berlin EF Office started this call. The main agenda of this call was Merge Related Updates from all clients and developers. Also, planning for the Shanghai Upgrade and Ethereum Magicians Protocol Roadmap Gathering @ Devcon VI.

An elegant #merge on an elegant screen! pic.twitter.com/nTlsZvH9LL

Fabio Di Fabio from Besu Team said that Besu had minor issues on the merge block itself. A Bonsai Trie issue caused some users to restart their nodes to restart the syncing. They are also minor missing attestation-related and timeout issues. Currently, the Besu team is investigating this part.

Fun Fact: Paritosh told everyone that there is a 98-99% participation rate, and everything is working as expected. Devs are also seeing full blocks. Also, there was a slight participation rate drop at The Merge (to ~95%), but it's mostly recovered now.

Andrew Ashikhmin explained that most Erigon nodes went through the transition smoothly. But some users have reported that it becomes stuck when they restart their nodes after the merge. Currently, the Besu team is investigating this part.

Péter Szilágyi from Geth Team called the merge surprisingly boring. The team and users found no issues in Geth. Although, he said that some users might have issues with client combinations. Also, here is the first Post Merge Geth Release. 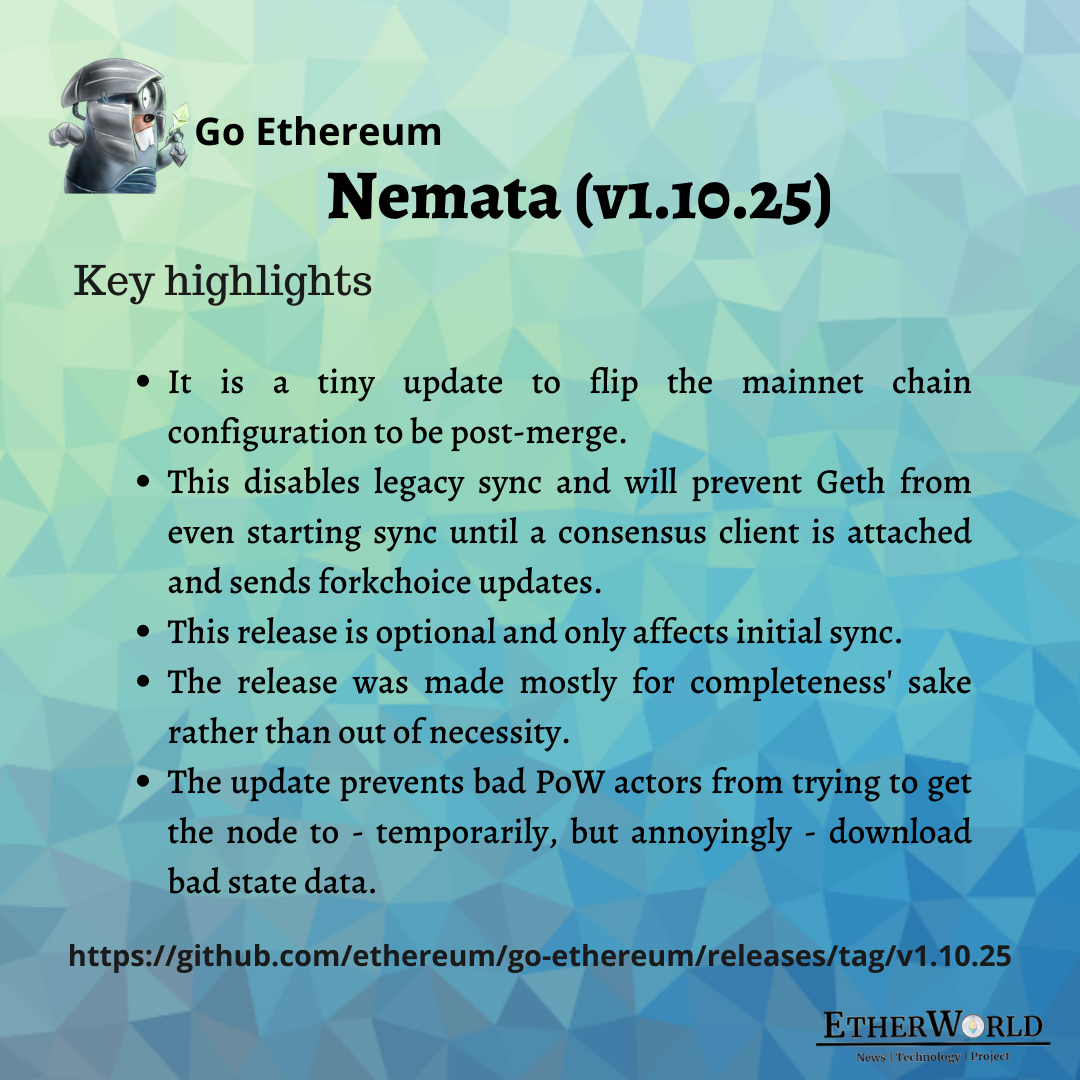 Ben Edgington from Teku Team said there were no issues in Teku. Although there were some issues with the Besu-Teku client combination, it was due to Besu.

Fun Fact: Micah Zoltu, one of the core devs, accidentally forgot to update his node. But things worked out fine after he did.

Update on PoW side of Fork

The Geth team also gave an update about the PoW side of the fork. So far, devs have seen ~25 blocks mined, all using pre-merge Geth releases. The merge geth release can be considered optional for miners, but if used, it would stop mining once TTD is hit. The latest PoW block was roughly ~2 hours old at the time of the call. Devs have seen the amount of mined blocks drop significantly because they are no longer being propagated on the network.

Since the near totality of nodes upgraded to PoS and these nodes stopped gossiping about PoW blocks once the network had been finalized, there aren't many nodes that will gossip about PoW blocks anymore. Once finality hit, devs saw a decrease in PoW blocks mined. According to the discussion on the call, Devs think it is rational and non-adversarial for miners to keep mining past the first TTD block until finalization. If they mine a valid TTD block, there's still a chance a validator would pick theirs over another one, as it's an uncle block.

This led devs to discussion on the Fork ID of the chain. With each network upgrade, nodes update their Fork ID to choose which peer to connect. If a peer is on a different fork, then disconnection takes place. This is specified in EIP-2124 and works using the fork block number. Here is discussion on EIP-2124 on Ethereum Cat Herders.

As we know, The Merge wasn't triggered by a block height but by the TTD instead. If readers are still confused regarding this, they can watch the video below by EW Team. But, again, this didn't happen automatically, meaning that pre and post-merge nodes can be peered to each other rather than fully partitioned at the p2p level.

So, to fix this issue, devs can specify a block to update the Fork ID for merged nodes. They have already done this on Sepolia Testnet. Devs will likely do the same on Mainnet and Goerli Testnet during the Shanghai Upgrade unless anything weird happens.

Chris Hager from the Flashbots team said that from their perspective The Merge went really well. He also had a proposal for CL clients to add SSE subscription for newPayload events. But the devs will discuss this on the next call.

ansgar.eth started this discussion. According to devs, EL and CL currently both store ExecutionPayload by default which adds a useless overhead to the storage requirements of running a node. CL teams are working to mitigate this issue. Prysm already has an available fix, and they will make it default soon after some final testing. Lighthouse also has a similar feature. Jacek Sieka has already created a PR regarding this issue. But the devs will discuss this topic more on the next call.

According to Tim Beiko, Devs have agreed to pause calls after next week's CL call (Sept 22, 14:00 UTC) until ACD on Oct 27 (14:00 UTC), except if something urgent comes up. They will try to progress on discussing the technicals of Shangai EIP candidates async and have optional #party-lounge hangs at our regular ACD/CL time weekly. He has also drafted a discussion for all the shanghai related talks. Devs also have an EthMagicians session to discuss the roadmap with the community at Devcon.