Filecoin is live on mainnet!

The Filecoin mainnet successfully went live shortly after block 148,888 mined. Filecoin is a novel blockchain- based data storage project that seeks to bring easy data accessibility to the end user. It intends to turn storage into marketplace. Mainnet- ready Filecoin include support for storage and retrieval deals in addition to storage mining. 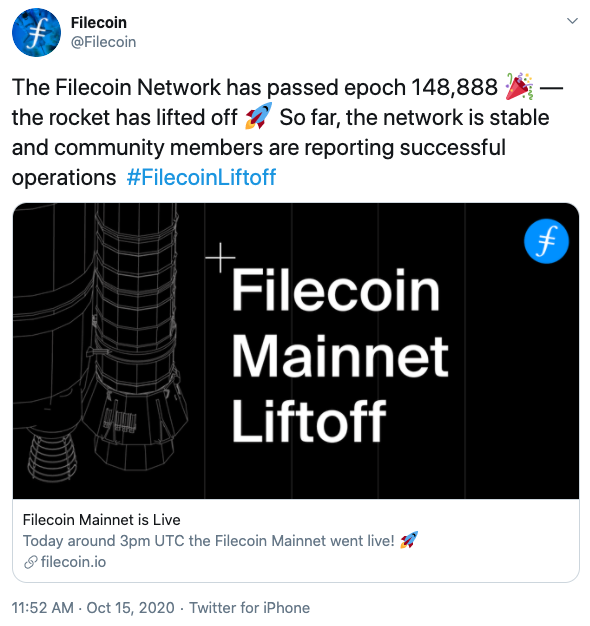 Launching a blockchain is an involved and lengthy process. Filecoin took a phased approach to launch mainnet. The project has been in development since 2017. Following Mainnet liftoff begins a period of monitoring and problem solving to ensure the smooth operation of the network after transition. Meanwhile, the officials announced to hold Filecoin Mainnet liftoff week from 19-23 October to celebrate mainnet’s successful launch.

LongHash Ventures in early October revealed Filecoin Frontier Accelerator. It is a 12 weeks program to fuel the growth of major projects on Filecoin network.

In Filecoin, gas model uses the concept of BaseFee to adjust the congestion of transactions. In congested blocks or where not enough transactions happening, the adjustment will take place at 12.5% rate. This is very close to what is proposed in EIP-1559 for Ethereum chain.

A key component of the Filecoin economy is block rewards. The more storage sectors a miner adds to the network, the more client data they are able to store, and the more Filecoin they are eligible to earn.

Slingshot is a community competition for storage clients and developers that rewards the storage of real, valuable, and usable data onto the Filecoin Space Race network (testnet).

Filecoin enables parties to exchange FIL currency through transactions recorded in a shared ledger on the Filecoin blockchain. Each section of the spec must be stable and audited before it is considered done.

Filecoin is receiving tremendous support and encouragement from not only the Filecoin community but other blockchain community as well. Péter Szilágyi, the lead developer for Go Ethereum (Geth), a client of Ethereum shared his support on twitter

Even before the token to launch, several exchanges already made preparations to list the coin. This signifies the belief among the crypto community in the potential of the FIL project. Just before a few hours to mainnet launch, Binance said that it would list the coin at block 148, 888. It will offer investors who deposited FIL into the exchange $100K in BNB prizes to be distributed among eligible users.

Crypto exchanges Gemini And Kraken announced for adding crypto support for the Filecoin (FIL) mainnet prior to it making through the market. Trading of the coin will follow soon after the listing. Gemini decided to add FIL to its custody services. Kraken too had announced to list FIL on the day of its mainnet launch and paired it with other trading currencies namely BTC, ETH and two fiats EUR and USD.

Major exchanges such as Coinbase, Huobi Global and Gate.io also announced to support the services of FIL recharging and trading along with conducting a series of activities to encourage users to trade.

Filecoin is an economic model

Filecoin is a decentralized data storage and distribution network that turns cloud storage into an algorithmic market. In August this year, Filecoin completed its mainnet Proofs Phase 2 Trusted Setup Program and launched the drand mainnet with partners Ethereum and Cloudflare. Unlike Bitcoin, the purpose of Filecoin is manifold. It is not just a currency. It forms the basis of the incentive system behind the decentralized storage network. FileCoin is perceived as a breakthrough in Internet’s evolution and the future of data storage. It is a project by Protocol Labs. With Filecoin model, data storage becomes a marketplace where anyone can pay for access to storage and earn revenue by providing access to data. Economic benefits are dispersed worldwide.

Market demand and supply chain determine the prices at which goods and services exchanged. In the case of Filecoin, if you have extra storage and computing power, you may be willing to provide it to others for a fee. While those seeking data storage may be willing to pay for storage services. Given the nature of Filecoinʼs Economy, the protocol must generate its own currency. The creation of new tokens can facilitate more trades and stimulate the economy.

Launching a blockchain is an involved and lengthy process. Filecoin took a phased approach to launch mainnet. The project has been in development since 2017. The Filecoin Token Sale was originally planned on July 27 at 7pm GMT, which then got postponed to August 7, 2017.  It had raised $257M in 2017 token sale on Coinlist. FileCoin mainnet was officially made the market headlines in 2018, since then the countdown had been going on.

Disclaimer: The information contained on this web page does not constitute financial advice or a solicitation to buy or sell any cryptocurrency contract or securities of any type. Trading is a high-risk activity. Readers are suggested to conduct own research, review, analyze and verify the content before relying on them.

Stay up to date! Get all the latest & greatest posts delivered straight to your inbox
No results found
↑ ↓ Navigate up/down
Enter Go to article
/ Search new term
Esc Close search
You've successfully subscribed to EtherWorld.co
Great! Next, complete checkout for full access to EtherWorld.co
Welcome back! You've successfully signed in
Success! Your account is fully activated, you now have access to all content.